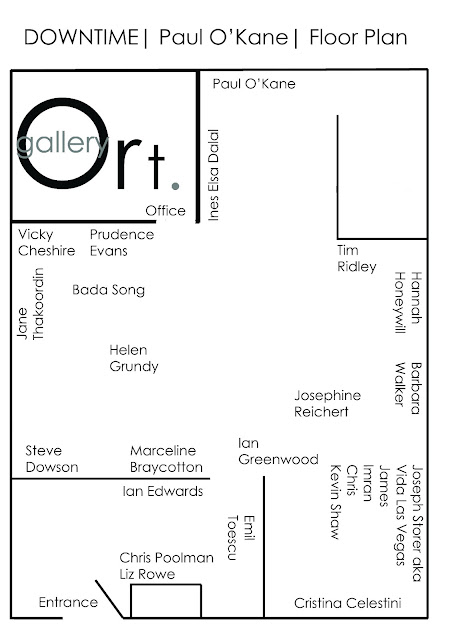 Recently I was asked to contribute a show to Ort. a fledgling space in a run-down part of Birmingham.

My instinct, during a reconnaissance trip, told me this was no place to trumpet my own skills or achievements (‘a show’) but rather an opportunity to let others speak.

The resulting event could justifiably be described as ‘socially engaged.’ It featured a mix of mostly local people including professional artists, aspiring artists, amateur artists, adamantly non-artists, and some who made art for therapeutic reasons, or reasons which, when given in a contextualising statement, remained so obscure to others that the term ‘outsider’ seemed accurate and appropriate to apply to them.

Though ultimately successful in its own terms, the whole project felt purposefully risky, and I used this word when launching it. But what was the risk? Perhaps it was the possibility that, by refusing to apply habitual professional judgments and standards we might produce something of no value, little value or dubious value, or something that any audience beyond the immediate contributors themselves might find difficult to evaluate.

Having completed the event I’m certain that all those involved, and some visitors too, would agree that this was not the case, that our own collaborative experience, and that which we offered for others to share and evaluate for themselves, was of value, and was in fact of that rare, true value, the value of that which is truly rare - unexpected, different, ‘thought-provoking’, challenging and progressive.
Posted by ANON at 22:45 No comments:

DOWNTIME is a socially engaged art project inspired by my recent visit to Ort gallery and the surrounding area.

Ort is an unusual new art space in Birmingham, catering for artists in an upstairs gallery and project space while providing friendly and relaxed café facilities downstairs which are frequented by people who are out of work (unemployment is high in the area.)

My proposal is to use the concept of DOWNTIME as a framework under which, not only local artists but other regular users of the café can make a representation of what they consider to be their own DOWNTIME.

The idea of non-allocated time might have first been associated with changing seasons e.g. after the harvest when country people would have found ways to repair and prepare.
Meanwhile, the aristocrat, the lofty academic (think of Kant’s daily strolls), followed in history by the Romantic poet and bourgeois flaneur, have all left traces of the uses of DOWNTIME in the history of culture. Sigfried Kracauer was one of the first to write seriously on the modern experience of boredom – something we can also discern amid the semi-decadent wit and irony of Oscar Wilde or more recently Morrissey.

From the early 20th century through to today, mass unemployment - produced by Capitalism’s intrinsic, careless dynamics - have blighted the lives of people who have famously (and infamously) responded in both creative and destructive ways to the imposition of unallocated time.
I want to instigate, and subsequently co-curate an exhibition wherein local people write poems, songs or raps; make drawings, photographs and You Tube films; anything that best shares their experience of unallocated time in Birmingham, 2012 - and particularly when infused with an inspired or intensified experience of the ordinary.

I hope that, by making and sharing representations in an exhibition, the community served by Ort gallery might become more aware and objective about their experiences and their conditions, and that this might generate some new sense of purpose and empowerment, during a difficult time for individuals, for the area, and for the country as a whole."
Posted by ANON at 05:42 No comments:

Hi all, this a Blogspot Blog for perpetuating the legacy and community of the recent DOWNTIME exhibition at Ort. Gallery Birmingham.
Posted by ANON at 00:58 No comments: